Just when I thought I was sort of done with Sugarpill (for now), they go and do a 50% off sale on boozyshop. I am such an addict! I ordered 2 more Chromalust loose eyeshadows…expect and update by Friday 😀

Hellatronic is one of the 5 Electrocutes which Sugaprill released not so long ago. A lot of people had problems with these beauties…perhaps because they wanted something that just works in 3 min…well, wrongly set expectations can do that to you! I mean: matte + neon + glitter…Did you really think that will just glide on?!

They take some work, and I guess I am lucky because Hellatronic is not a troublemaker. It causes very minimal fall-out given its nature…it “attaches on” quite well, and the glitter sticks around until you take your makeup off. Me happy!

The look I would like to show you stars not only Hellatronic but also the Poison Plum eyeshadow from Sugarpill’s Burning Heart palette: 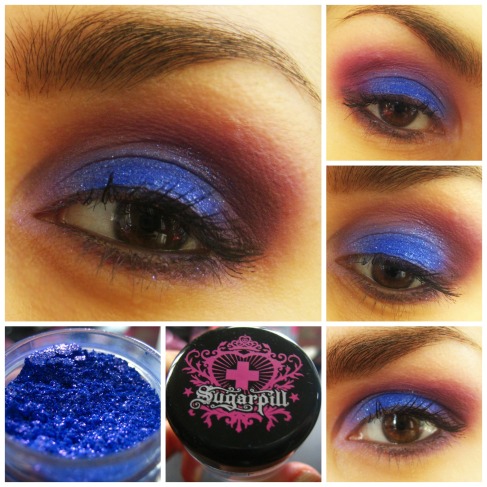 I have recently realized that showing only eye photos doesn’t always do enough justice to the makeup, so I will do my best to also have a full face photo featuring the look in the future. Starting today! =>

I love how blue Hellatronic is! If instead of purple, I had used a darker shade of blue, it would have turned out really pretty as well….even more blue! I will definitely try and show you some time.

I didn’t wing a liner, because I thought the look was already pretty dramatic, but maybe it would have made it even better…what do you guys think?